On baseball diamonds this spring, you will hear coaches consistently praising players for their “good eye” when players hold off on swinging at obvious balls. In Major League Baseball, players have developed reputations for having a good eye or being a hack, which can be supported by statistics like walk rates and strike out rates. While baseball has been at the forefront of utilizing analytics, it has yet to develop a way to measure a player’s ‘good eye’. There is not one statistic that is specifically dedicate to measuring a player’s ability to identify whether a pitch is going to be a strike or ball and make the appropriate decision to swing. With the use of MLB’s Pitchf/X data, I develop this rating for players for the 2015 season.

The first step in this task was to classify each pitch as a strike or a ball. Using the average measured height of each batter from the Pitchf/X data and the plate dimensions, I created a strike zone for each player. Then using the location of where each pitch crossed the plate, I classified the pitch as a strike or a ball. This location data is available for each pitch regardless of whether it was hit or not. I did, however, remove pitches that hit the batter or were for intentional walks leaving me with 697,062 pitches, of which I identified 44.5% of them as strikes.

Now that we know which pitches crossed the plate in the strike zone, I wanted to build a model to that could predict whether or not a pitch would be a strike or ball based on measurements of the pitch right after it is thrown. Player cannot wait until the pitch crosses the plate to decide to swing; they have to make a guess about the end location of the ball fairly soon after the pitcher releases it. So I limited the input variables to the ten 10 features of the ball’s movement measured 50 feet away from the plate, 10 feet after being released by the pitcher. After splitting the data into two sets and training the model with a random forest classifier on the training set, I was able to achieve 90% prediction accuracy on the test set of the data. Then I used the fitted model to predict the probability of strike for every pitch. Below is a histogram showing the breakdown of the probability that a pitch was a strike. 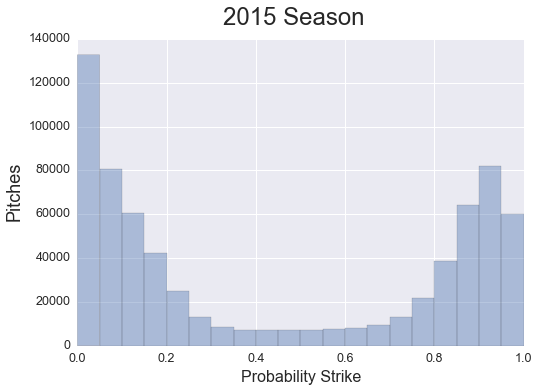 As you can see, most pitches either have a very low probability of being a strike or a high one, with a smaller percentage of them falling into the middle zone.

A machine-learning algorithm was able to accurately predict strikes and balls 90% of the time, but how accurately can a baseball player predict strikes and balls? This is difficult to know since there is no direct data point that tells this. However, we can approximate it by looking at whether or not the hitter swung at the pitch. Logically, if a hitter thinks a ball is going to be a strike he will swing at it, and will not swing if he thinks it is going to be a ball. This is obviously not an exact measure, since the context of the situation might change a hitter’s behavior. A hitter might be ahead in the count, 3 balls and 0 strikes, and hold off on swinging in hopes of drawing a walk. As a general rule though, we would expect a hitter to swing more at pitches that have a high likelihood of being a strike and swing less at pitches that are more likely to be a ball.

In order to check if this logic holds I grouped the pitches into deciles based on their probability of being a strike and then calculated the rate at which players swung at those pitches.